The story between Bruce and Magicycle began on the 6th of October 2021 when he finally decided to click that button.

Bruce is a warm-hearted man active in the Magicycle FB community and YouTube assisting Magicycle owners in the group with their questions and problems about Magicycle electric bikes such as brakes replacement, skid plate installation, password setting, etc. After receiving his first Magicycle cruiser ebike, he started to make videos published on YouTube(known as RV enthusiast) about Magicycle electric bike cruiser. He is a star not only in the Magicycle owners’ group but also in our office room. We appreciate his generosity in sharing knowledge with all members of the group and his work to promote our products.

Lucky am I that Bruce accepted my invitation for an interview during Magicycle live streaming. I once asked about his motivation and intention. His answer is quite simple: the price and quality are amazing. The words are certainly the biggest praise to us. He kept posting ebike knowledge for over one year and then on 28th October 2022, he dressed himself up, turned on the camera, and shared his ideas about Magicycle during the Livestream:

Q1: Why did you choose the Magicycle Cruiser ebike? 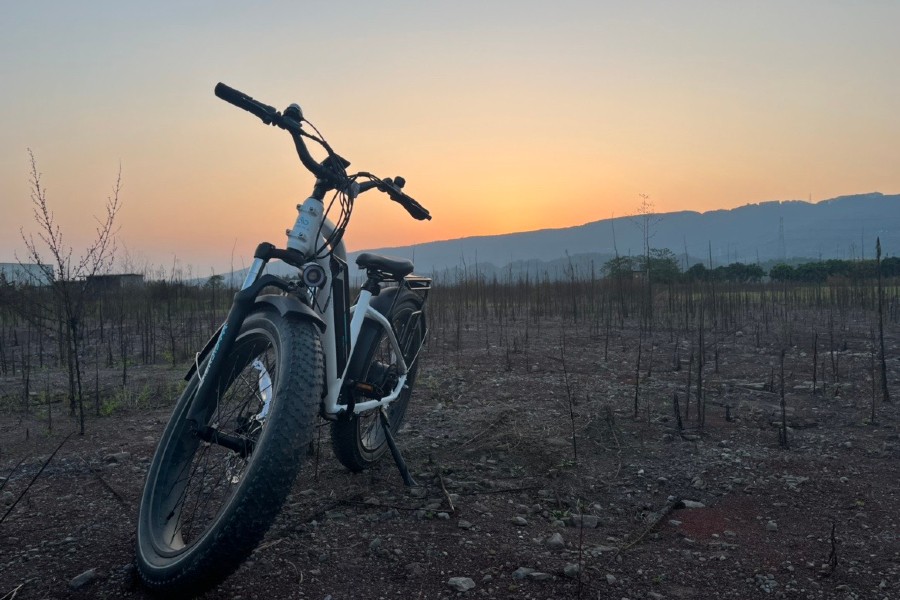 I bought the cruiser step over and step through at the same time. I bought the Cruiser step-through for my wife although I ride it more than she does because that will be not the same with the Ocelot (which is a 20” low step-through ebike). I bought two when I was researching other bikes and I hadn’t heard of Magicycle when I was looking at your competitors. I was to pull the trigger that night and my wife said why don’t you just sleep on it so I slept on it until morning and when I woke up and I said well I got all day I’ll just look a little bit and I stumbled across the Magicycle.

Being a non-experienced ebike person everything seems similar. I just kept looking and I finally said well it’s essentially the same bike and it cost a little bit less so I’m buying two of them that are going to save me a little money I pulled the trigger on the Magicycle and have not been disappointed at all.

When you do research and you start looking and understanding what torque is and you know the voltage and how voltage affects current you’ll understand that the Magicycle cruiser had more power than other bikes. Not a significant amount of torque but 10 or 15, 16-newton meters of torque difference than a competitor. I thought torque moves weight. More torques move weight better than less torque so I looked at the torque and I said, man! That’s got a lot of torque which is power.

Also, the reality is that Magicycle is doing a better job than any other ebike manufacturer out there with their customer service which is better than anybody. I deal with several companies on ebikes and I used to tell you guys that what you have to do well in America is customer service and a quality bike and you guys are doing both of them and that’s why you’re going to be successful.

Q2: Before you pull the trigger, why do you need an ebike? And why must it be a fat tire ebike?

The first reason I was looking at fat tire ebikes is that I live close to the beach about an hour and a half. I thought I might ride it on the beach so I wanted a more stable platform than a skinny tire bike. I currently owned a skinny tire bike that is a mid-drive and I mostly rode it on the road but I wanted to ride on paths up here in Oregon. You know I’m just getting a little bit of weight and I said I’m just not getting out there on the regular bike that I owned sitting in the garage for more than one year so I chose the fat tire ebike.

I needed one which has more power than other bikes not enough to make me feel comfortable I wasn’t riding anymore. It’s not fun to ride. So when I got the Magicycle I knew it was going to be better. I didn’t know how much better but I knew it was going to be a better bike. And when I got it and I rode it for the first time, I was more than pleasantly surprised. This is just made a dramatic change in my life and gave me a great hobby and I enjoy getting out on the bike. It’s a lot of fun.

Q3: Do you feel any differences between a 52v system Magicycle ebike compared with other ebikes with a 48v or 36v system?

The Magicycle is one of the 750 watts bikes I have but the power is certainly evident when you take off and when you accelerate. There’s definitely a power band that’s way better than others like 500 watts ebike. The bike sells itself.

If someone’s sitting on the fence and they’re considering another bike that’s a 48v 15amp or 48v 20amp battery it doesn’t have the 96 Nm of torque. Compared to all the components that are on the bike and you’ll find that the Magicycle components are equal and the battery is better. The battery produces about 8% more energy when you look at 48v versus 52v. That gives you power.

Q4: What about the range of the Magicycle cruiser? 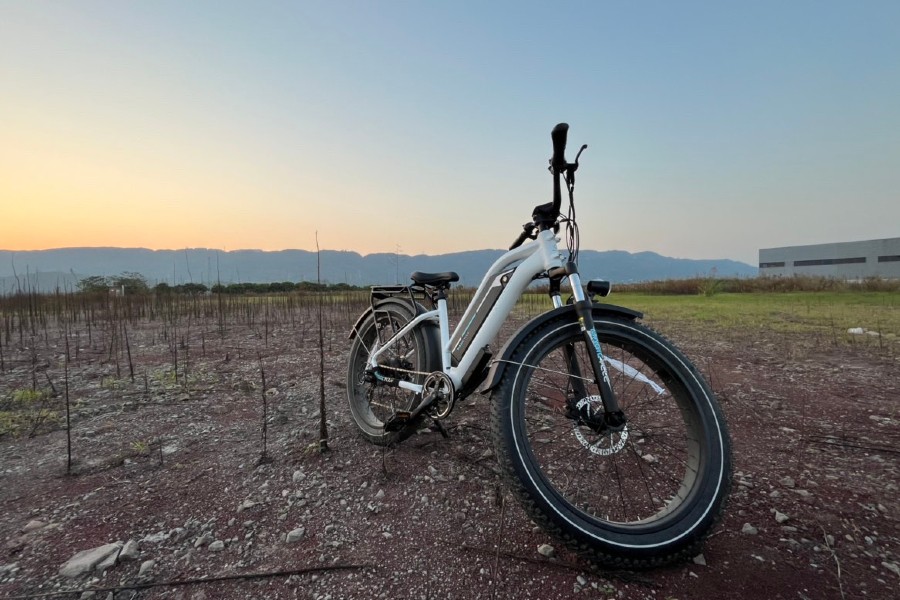 I’m a big guy. I’m not little. When I first got the cruiser I was probably 280. When I first did the range test on the cruiser the range on the cruiser was like 23 miles. Well carrying that was a good range. I was pretty pleased with it knowing that I did not pedal one strike. I did not do one rotation and I got 23 miles. I do it for a reason. I don’t do it because I’m lazy I do the range test without pedaling because someone that might be 200 pounds or 160 If I’m getting 23 miles and you weigh 160 and your worst case should be a few miles better than that.

Q5: There are abundant accessories on our website, what accessories in your mind are necessary? Do you have any recommendations?

You guys have several on your website that are really good and you talked about it on the last live streaming you guys got the pink and blue helmet I kind of like it. I think they’re pretty cool. I like color although my bikes are black and white, I do like color. So I think the helmets are a good one.

The phone holder is really a good one as well. As a YouTuber, I have to have one because I have to use some of the phones for documenting, and in my case, I use it as my recorder.

And also an important one is the mirrors. I think you need to have a decent mirror and if you can get them on both sides that’s even better. I think mirrors are very important.

Q6: Do you have any suggestions for our viewers about the maintenance of the ebike?

Here in Oregon, in mid-October and late October, we’re going to have a lot of rain so you won’t get to ride the bike as often as you may like. So make sure you store your battery in a cool dry place. A garage is a fine place. I have a pole barn as well but I don’t store my batteries in the barn which is a lot colder, and the humidity is worse. So make sure you store your batteries in a cool dry place. Give a charge to them around 80 percent and then every 45 or 60 days go back and make sure that you’ve still got some form of charge. They’re not gonna deplete in 45 to 60 days but recharge them up to about 80 percent so if you can hold them between 50 to 80 percent you’re doing really well.

Then before you put it away for the winter I would lube the chain, and check the air pressure in the tires. If you keep your bike on the floor, put a little something between your bike and your concrete because concrete will suck moisture out and over time it will wear tires out. Probably not on a bicycle in terms of how much you use it. It definitely happens on RVs.

Make sure you check all your nuts and bolts as you put it away and then the same thing in the spring when you take it out to ride. Give yourself a full charge, check all the nuts and bolts make sure they’re tight, especially the skewer on your front wheel and back wheel. 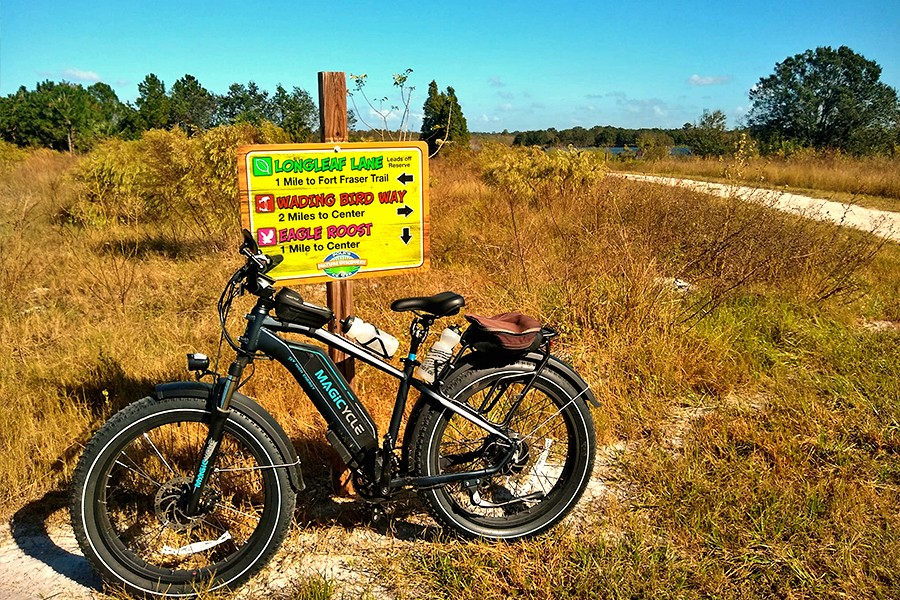 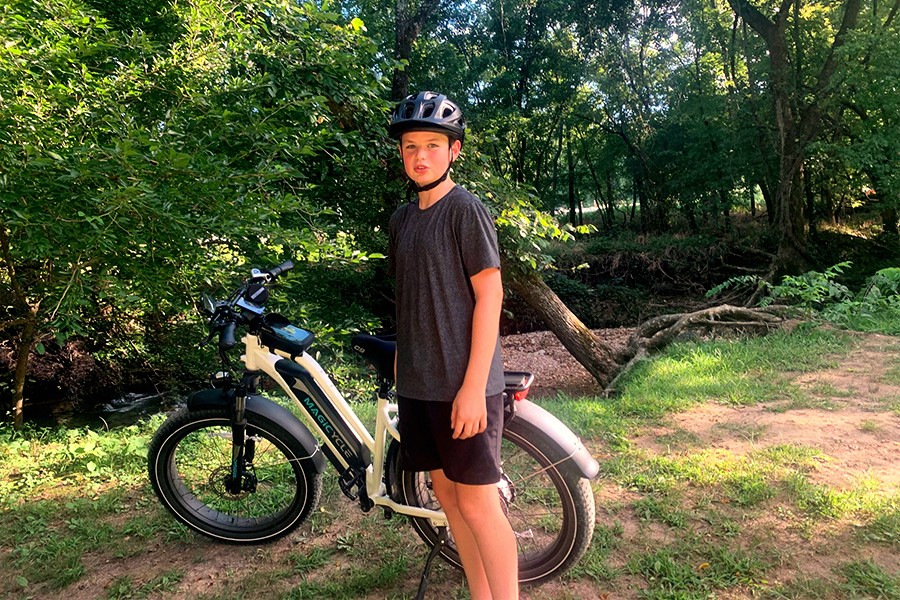 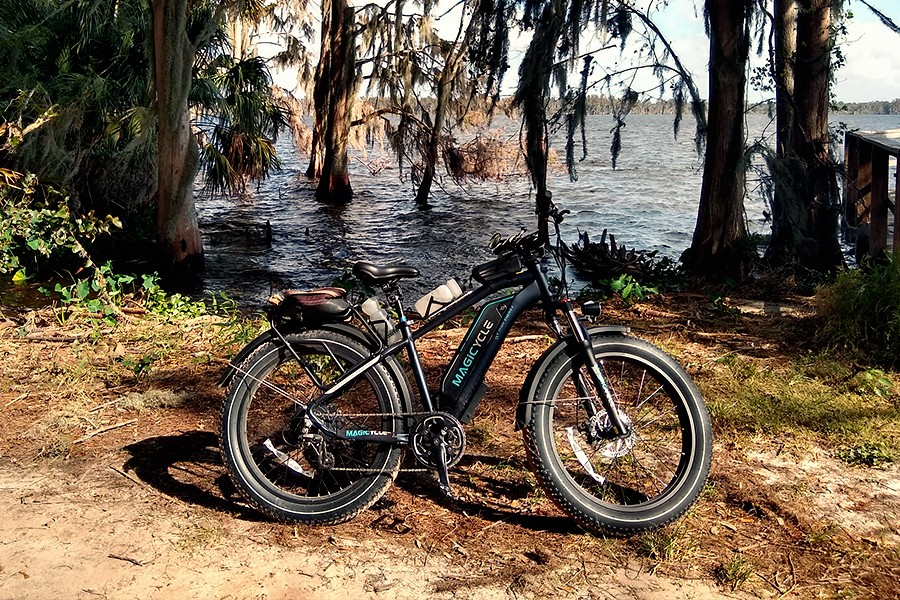 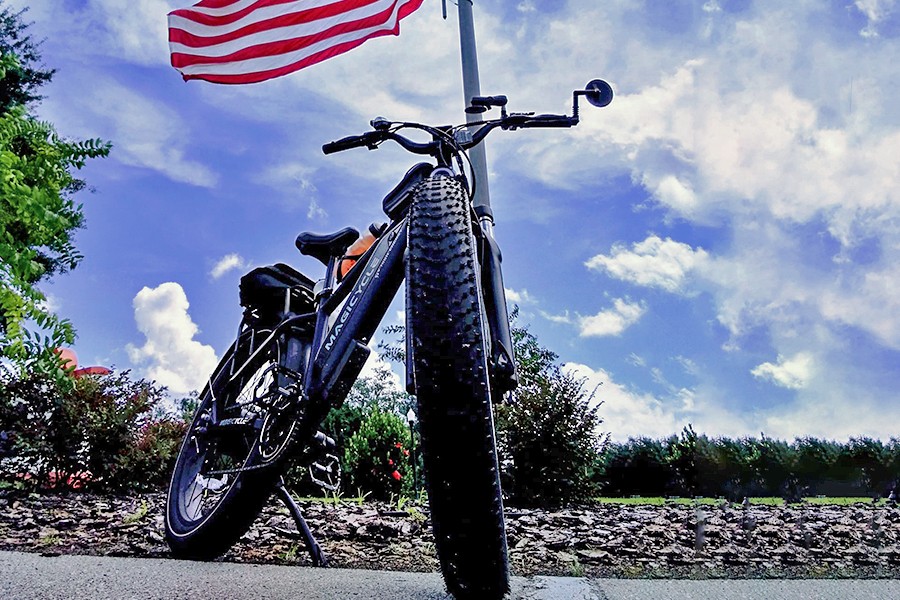 Electric Bike Supension: Everything You need to Know 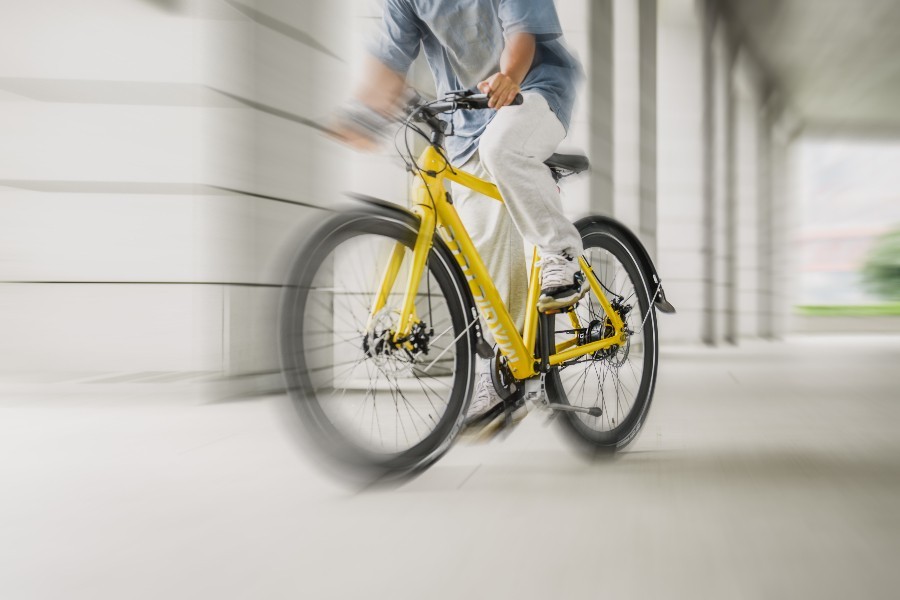 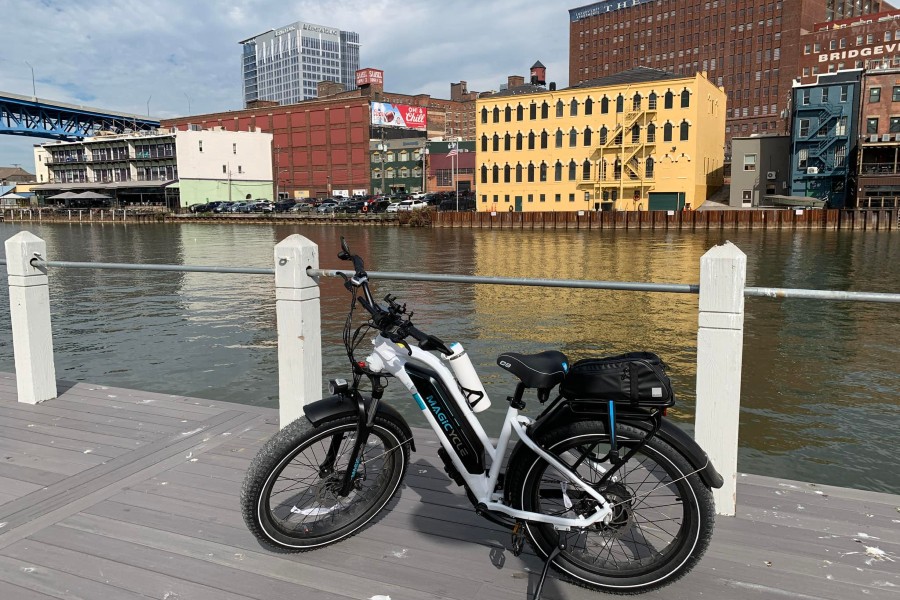 Sign up to get the latest on new releases and more.